To share your memory on the wall of Henry Mastowski, sign in using one of the following options:

Hank is survived by his loving wife of 61 years, Patricia (Lynch). He is also survived by his two sons, Michael and his wife Joan, of Florida and Mark and his wife Bernadette, of New Jersey. “Grandpa Hank” also leaves behind 5 loving grand-children, Kimberly Lingenfelser, (Bryce), Jason, Aileen, Devan and Colin Mastowski. He is also survived by his 2 brothers, Raymond, (Elizabeth-deceased) and Frank, (Ellen) Mastowski. Hank was also the loving brother-in-law of Thomas and Anne Ciranello and Brian and Lois Stout and the late Raymond and Barbara Lynch. Uncle Hank also had many loving nieces and nephews.

Family and friends are invited to attend a visitation Wednesday, April 10, 2019 from 4 – 8 pm at Orender Family Home for Funerals, 2643 Old Bridge Road, Manasquan, NJ. A Mass of Christian Burial will be 11 am Thursday, April 11th at St. William the Abbot Church, 2740 Allenwood Lakewood Rd., Howell, NJ. Henry will be laid to rest 1:30 pm on Thursday, April 11th at Brigadier General William Doyle Veterans Cemetery in Wrightstown, NJ. In lieu of flowers memorial donations may be made to Tidewell Hospice, 1144 Veronica St.,Port Charlotte, Florida 33952. To send condolences to the family please visit www.orenderfamilyhome.com.
Read Less

To send flowers to the family or plant a tree in memory of Henry Joseph "Hank" Mastowski, please visit our Heartfelt Sympathies Store.
Print

Donations are being accepted for: Tidewell Hospice.

We encourage you to share your most beloved memories of Henry here, so that the family and other loved ones can always see it. You can upload cherished photographs, or share your favorite stories, and can even comment on those shared by others.

From- James, Jo, Jimmy, Morgan, Dan, Maddy and Ada, From- Bryan, Haley, Gabby and Mary, and other have sent flowers to the family of Henry Joseph "Hank" Mastowski.
Show you care by sending flowers

Posted Apr 11, 2019 at 12:14pm
Dear Mastowski Family,
Our hearts are joined with yours in cherishing the memories of time spent with Hank here in Port Charlotte and the many many MCL events over the past 20+ years. I think the best time was enjoying the Celebration of their 50th Wedding Anniversary. "Thanks for the Memories" of a live well lived.
Comment Share
Share via:
FS

Posted Apr 10, 2019 at 11:21pm
So Sorry to hear of Hank's passing and return to the arms of our Loving God. He was a good man and a great soldier and a faithful Catholic all his life. We go back a long time together with roots in Bayonne and in Port Charlotte. I will pray for him and you, Pat and Anne that you may all come to peace.
With deep affection,
Fr. Art Schute
Comment Share
Share via:
AZ

Posted Apr 10, 2019 at 04:17pm
So sorry to hear about Hank. May the peace and love of Jesus be with you and comfort you. You and your family are in our prayers.
Bill & Anne Zeithammer
Comment Share
Share via:
HS

Posted Apr 10, 2019 at 11:14am
RIP Coach. Condolences to Mrs and to fellow Nardini Electric Champions Mike and Mark, and your entire family. Sincerely Mark Gaddis

Flowers were purchased for the family of Henry Mastowski. Send Flowers 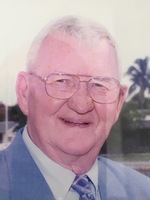