To share your memory on the wall of Richard Holst, sign in using one of the following options:

Provide comfort for the family of Richard Holst with a meaningful gesture of sympathy.

Richard was predeceased by his parents George and Irma Holst; a brother George W. Holst; a sister Carol A Fredett. He is survived by his devoted wife of 47 years Cynthia Holst of Barnegat; his loving son and daughter-in-law Richard William Holst and his wife Stacy of Freehold; his loving daughter and son-in-law Melissa Marie Grispart and her husband Gregory of Manahawkin. Richard is also survived by his four cherished grandchildren Bridget Elise and John (Jack) Golden, Richard Harold and Alexandra Karyn Holst; a beloved brother Robert F Holst and his wife Gale of Newark, DE and sister-in-law Jacqueline F Holst of Maine.

Family and friends are invited to attend a visitation on Wednesday July 3, 2019 from 4-8 pm at Orender Family Home for Funerals 2643 Old Bridge Road Manasquan, NJ 08736. A funeral service will begin at 7 pm. Cremation will be private. In lieu of flowers memorial donations may be made to Shriners Hospital for Children 2900 N. Rocky Point Drive Tampa, FL 33607. To send condolences to the family please visit www.orenderfamilyhome.com.
Read Less

To send flowers to the family or plant a tree in memory of Richard George Holst, please visit our Heartfelt Sympathies Store.

Donations are being accepted for: Shriners Hospital for Children.

We encourage you to share your most beloved memories of Richard here, so that the family and other loved ones can always see it. You can upload cherished photographs, or share your favorite stories, and can even comment on those shared by others.

Ed, Potter Family, and others have sent flowers to the family of Richard George Holst.
Show you care by sending flowers

Posted Jun 30, 2019 at 04:08pm
My memory of Dick will always be that of a committed and determined member of the Oceanaires Barbershop Chorus who NEVER let his personal mobility challenges interfere with his happiness in being a gifted bass "barbershopper". May he enjoy the peace that is his now and forever.
Barry Burke
Lakewood, NJ
Comment Share
Share via:
J

Posted Jun 30, 2019 at 06:56am
At this sorrowful period in your life, please accept my sincerest condolences for the death of your loved one. Reflecting on the divine promises found in the Bible will give you the hope and strength to keep going until all of God’s promises are fulfilled. (John 5:28, 29; Isaiah 33:24; Isaiah 45:18; 2 Corinthians 1:3, 4.)
Comment Share
Share via:
TM

The Holst and Morrow Families in Maine

Posted Jun 29, 2019 at 08:56pm
Forever Love and a lifetime of happy memories. Our thoughts and prayers are with you.

The Holst and Morrow Families in Maine purchased flowers for the family of Richard Holst. Send Flowers 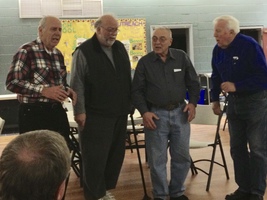