To share your memory on the wall of John Donohue, sign in using one of the following options:

John was born in Kearny, NJ, to the late John and Catherine Donohue. He attended St. Cecilia's elementary and high school in ... Read More
John "Bud" Francis Donohue, 82, of Howell, passed away on July 20, 2019, in his home comforted by his family.

John was born in Kearny, NJ, to the late John and Catherine Donohue. He attended St. Cecilia's elementary and high school in Kearny. He played soccer, basketball & baseball during those years and was co-captain of the Saints leading them to a State Championship in soccer his senior year. Most importantly, this is where he met his love, Rosemary Shields Donohue, who he remained married to for 55 years until her passing last month.

Bud spent his entire career in the frozen food service industry and was a proud member of the Teamsters. He is also a veteran of the U.S. Army. In 1967, he and Rosemary moved to Manasquan, NJ where they would raise their family and reside for the next 41 years. Bud was an active parishioner in St. Denis parish, serving as a Eucharistic minister and on the parish council. He was also heavily involved with St. Denis School where he started their boys soccer program and served as their first coach. In addition, Bud coached school & rec basketball as well as Little League. Not busy enough, he also was one of the original founding members of the Manasquan Elks.

After retiring, he and Rosemary moved to Pine View Estates in Howell. They became active parishioners of their local church, St. William the Abbott. Bud quickly became involved with a variety of activities and clubs there which helped foster special friendships that remained an important part of his life until his passing. Bud's greatest pride and joy was his family, which he always ensured was priority one throughout his entire life. His goal of providing better opportunities for his children was an outright success and for which we will always be grateful. His love, strength & humor helped shape our extended family. He is with us always. Bud was an avid sports fan and the NY Yankees and NY Football Giants received his support and analysis. He enjoyed music and dancing, any and all parties and celebrations, his wit was unmatched. He took pride in the ability to fix most things in the house or the car with his own hands and loved spending as much time as possible with his grandchildren.

Bud was predeceased by his best friend and beloved wife, Rosemary Shields Donohue; and is survived by his loving children, John Donohue, wife Tricia and children Anna, Jane and Michael of Portsmouth NH; Katie Kappy, husband Rick and children Emmy and Meegan of Wall, NJ; and Mary Beth Golden, husband Mike and child Charlie of Portland, ME; and his sister Kay Kolon.

In lieu of flowers, memorial donations may be sent in John's memory to http://charitywater.org/ . To send condolences to the family please visit www.orenderfamilyhome.com.
Read Less

To send flowers to the family or plant a tree in memory of John F. "Bud" Donohue, please visit our Heartfelt Sympathies Store.

Donations are being accepted for: Charity:Water.

Posted Jul 22, 2019 at 05:28pm
We are so sorry to hear of your Dad’s passing. We had no idea you also lost your Mom last month. We were their ‘hello’ neighbors and aren't involved in any club activities so our interactions with your folks was limited. What we do know of them is they were lovely people and we offer our sincere sympathy. With prayers Joan and Al Damiano
Comment Share
Share via:
JR 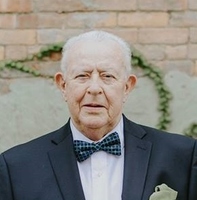