To share your memory on the wall of George Sevastakis, sign in using one of the following options:

Provide comfort for the family of George Sevastakis with a meaningful gesture of sympathy.

After graduating from Asbury Park High School, George worked for JCP&L before attending Glassboro State Teachers College (now Rowan University). At Glassboro he earned a bachelor’s degree in history and a teaching certificate. At Glassboro he played baseball and basketball, was the manager for the football team, produced musical productions, and found time to socialize and meet his wife. George became a resident of Brielle after graduating from college and remained so until he passed.

George was employed his entire educational career by the Brick Township Board of Education. He started in the Osbornville Elementary School eventually moving to Brick Township High School teaching history. Later in his career he became a guidance counselor, all the while, coaching various sports with basketball being his mainstay. He coached both girls’ and boys’ basketball teams for the high school for 25 years. “Going into the teaching is like going into the priesthood. It’s a calling.”

George was not only a basketball coach but a basketball official for 28 years. He was elected into the International Board of Officials’ Hall of Fame. He officiated for high school and various other leagues throughout the state of New Jersey. “Officiating is just a different way of coaching.”

George enlisted in the New Jersey Army National Guard serving in company C of the 50th Armored Division (Jersey Blues) Heavy Tank Battalion achieving the rank of sergeant. Most of his training was completed at Fort Drum in Watertown, NY. He joined the Guard because he was interested in tanks and was hoping to gain some hands-on experience in them. Legend has it once his commanding officer found out he was of Greek descent and his dad owned a diner he was assigned to kitchen duty where he became the regiment cook. “I wish I still had that army cookbook.”

George served two terms as a Councilman for the Borough of Brielle from 1975-1980. He proudly served on the Republican Committee of Monmouth County until his passing. “Go vote.”

George was licensed by the United States Coast Guard as a Merchant Marine Officer. George learned the recreational fishing business from his in-laws, and eventually bought the EZ party boat from them. The EZ was one of the three of the EZ fleet of party boats owned by his late wife’s family. He eventually sold the EZ and bought the Lilly P II successfully running a charter boat business for many years out of Brielle, NJ. His boat the Lilly P II was his pride and joy and many fabulous memories were made on the boat by his customers and family. After retiring from the charter boat business, George could be found working deck on various party boats or just hanging out in the wheelhouse giving unsolicited advice to anyone who would listen. “Get your captain’s license, you will always have work.”

The unofficial mayor of Brielle, George in his retirement loved working as the Union Landing’s parking lot attendant. He loved the puzzle of cramming as many cars as possible into the lot. He met and talked with friends old and new while attending the lot and again giving unsolicited advice to anyone who would ever listen. “You can’t fly with the hawks at night and soar with the eagles in the morning.”

George loved to travel in his RV with his wife and dogs loudly singing “On the Road Again” any chance he got. Cherrystone Campground in Virginia was one of his favorite spots on the east coast along with Hannah Park in Jacksonville, Fl. “You should buy a camper, it’s the best way to travel. Start with a pop up.”

A memorial visitation will be Saturday, September 28 from 1-4 pm at Orender Family Home for Funerals, 2643 Old Bridge Road, Manasquan. A Celebration of Life Service will begin at 3:30 pm. At the family’s request, please dress casually.

We encourage you to share your most beloved memories of George here, so that the family and other loved ones can always see it. You can upload cherished photographs, or share your favorite stories, and can even comment on those shared by others.

Posted Nov 23, 2019 at 05:26pm
My condolences and prayers go out to the family. Brielle has lost a piece of it's heart.
Comment Share
Share via:
JJ

Posted Sep 18, 2019 at 06:26pm
I had the honor of being the Borough Clerk when your Farther was on Council. He was a great Councilman and a good friend.
John H. Jansen Jr. 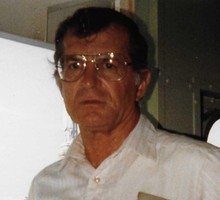