To share your memory on the wall of William Wingard, sign in using one of the following options:

Provide comfort for the family of William Wingard with a meaningful gesture of sympathy.

Bill was predeceased by his wife of 63 years N. Marie in 2014. He is survived by his loving children William “Bill” Wingard, Jr. of San Diego, CA, Ellen Gannon and her husband Kevin of Spring Lake and James “Jim” Wingard and his wife Karin of Spring Lake. Bill was also the cherished grandfather to Denise (PJ) Klein of Wilmington, NC, Christin (Michael) Nugent of Safety Harbor, Fla, Cecelia, James and Matthew Wingard of Spring Lake; cherished great grandfather to Hadley Drew and Georgia Pearl Nugent and Keegan Marie and Palmer Elizabeth Klein.

Family and friends are invited to attend a visitation on Sunday, December 8, 2019 from 2-6 pm at Orender Family Home 2643 Old Bridge Road, Manasquan. A Mass of Christian Burial will be held at 10:30 am on Monday, December 9, 2019 at St. Catharine’s Church, Spring Lake, NJ. Interment will follow at St. Catharine’s Cemetery, Sea Girt. In lieu of flowers, memorial donations may be made to St. Jude Children’s Research Hospital PO Box 1000 Dept 142 Memphis, TN 38101. To send condolences to the family please visit www.orenderfamilyhome.com.
Read Less

Donations are being accepted for: St. Jude Children's Hospital.

Posted Dec 09, 2019 at 09:47am
We were so privileged to know Bill through our membership at the Spring Lake Golf Club. A few years back when we would be there for dinner by ourselves we would notice a distinguished looking older gentleman sitting at the corner of the bar having dinner all by himself. We are thankful that we took the initiative and introduced ourselves to him. On occasion if we were all arriving at about the same time we would invite him to join us for dinner. He would delight in telling us stories of his family and his blessed life. He was a classy, bright, and considerate gentleman. We will miss our “new ” dinner guest Bill Wingard. He is reunited with Marie in Jesus’ arms.
Joe & Pat Casey
Comment Share
Share via:
J

Posted Dec 08, 2019 at 12:58pm
William Wingard touched many lives. He came to my aid whe my husband , a New Jersey State Trooper, was killed in the line of duty. He presented with me a check from the 200 Club of Monmouth/Ocean Counties. He lifted me up in my darkest hour. William Wingard was a Wonderful Human Being. I will miss him.
Comment Share
Share via:
LT

Posted Dec 08, 2019 at 07:45am
Always a gentleman in every sense of the word. He will be missed greatly.
Lynne Eggers Truex
Comment Share
Share via:
R

Posted Dec 06, 2019 at 11:06am
Bill and the rest of the Wingard family, I am so sorry for your loss. I remember both very well. They were such kind people. Your dad did so much for the town of Spring Lake. They just don't make them like that anymore
Comment Share
Share via: 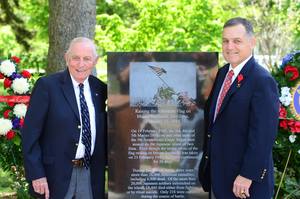