To share your memory on the wall of Daniel O'Connell, sign in using one of the following options:

Dan was predeceased by his wife Joan and son Charles. He is survived by four children: his son Dan, MD, and partner Susan Moscou of the Bronx, NY; his daughter Kim and husband Oscar Palacios of Rutherford, NJ; son Christopher, Esq., of Redwood City, CA; and daughter Megan and husband Dennis Linder of Branford, CT. He was also blessed with six grandchildren: Luke, Aliya, Billy, Marisol, Jack, and Michael.

Family and friends are invited to attend a visitation from 1 - 4 pm on Sunday, January 12th at Orender Family Home for Funerals, 2643 Old Bridge Road, Manasquan. A Mass of Christian Burial will be 11 am on Monday,January 13th at St. Denis Catholic Church, Manasquan. In lieu of flowers, donations may be made to Livestrong Foundation in honor of his son Charles, www.livestrong.org. To send condolences to the family please visit www.orenderfamilyhome.com.
Read Less

Donations are being accepted for: Livestrong Foundation.

We encourage you to share your most beloved memories of Daniel here, so that the family and other loved ones can always see it. You can upload cherished photographs, or share your favorite stories, and can even comment on those shared by others.

The residents of Montefiore Family Medicine 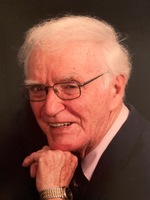