To share your memory on the wall of Frederick Steller, sign in using one of the following options:

Dr. Steller was preceded in death by his wife Madeline, parents, his youngest daughter Michele, and his oldest son Robert. He is survived by his daughter-in-law Patricia; daughter Kathleen; his son Frederick, Jr., and wife Carol; his daughter Susan, and husband Scott; and his son Brian, and wife Candice. Dr. Steller was the cherished grandfather of nine grandchildren: Brandon; Heather, her husband Adam; Bridget, her husband Matthew; Michael, his wife Stephanie; Lauren; Connor, his wife Kendyl; Caroline, her fiancé Daniel; Taylor, his fiancée Catherine; Elizabeth, and 8 great grandchildren.

Family and friends are invited to attend a visitation on Wednesday, February 26, 2020 from 4-8 pm at Orender Family Home for Funerals 2643 Old Bridge Road Manasquan, NJ. A Mass of Christian Burial will be 9 am Thursday February 27, 2020 at St. Catharine’s Church, Spring Lake. Interment to follow at St. Catharine’s Cemetery, Sea Girt. In lieu of flowers memorial donations may be made to American Heart Association 1 Union Street Suite 301 Robbinsville, NJ 08691. To send condolences to the family please visit www.orenderfamilyhome.com.
Read Less

To send flowers to the family or plant a tree in memory of Frederick C. Steller, please visit our Heartfelt Sympathies Store.
Print

Donations are being accepted for: American Heart Association.

We encourage you to share your most beloved memories of Frederick here, so that the family and other loved ones can always see it. You can upload cherished photographs, or share your favorite stories, and can even comment on those shared by others.

Posted Feb 26, 2020 at 10:35am
May God Bless the Steller Family at this time and always! BARRY & JEAN MARIE WIEGMANN AND FAMILY. SCHULMAN WIEGMANN & ASSOCIATES REPORTERS AND STAFF

It has been many, many years since the Starkes, Suhrs and Isenschmids were your neighbors in Spring Lake, and we have nothing but the finest, happiest memories of those times. Your parents and ours were always best friends. Your father was our family doctor and took care of our grandparents, parents and us lovingly for three generations. He even stepped into the fourth generation when our firstborn, Jay, spilled hot coffee on himself one Sunday morning after a big party. I saw your father last when he gave a talk one evening at the Community Center in Spring Lake about the polio crisis we lived through in the 1950s. You can be very proud of your father's accomplishments in his professional life, but just as importantly about the fine life he lived as an American, a father and a grandfather.

When my own father announced the death of one of his parishioners in his German Lutheran Church of St. Paul in New York City he always recited a short poem that I long ago translated into English and send to you today with love and blessings from our family to yours:

What we return to earth today
Is nothing but its due;
What we have loved in life remains,
Forever part of me and you.

May God bless and keep you always safely nestled in his loving hand.

I hope one of you might read this message sometime during the observances that we will not be able to attend. 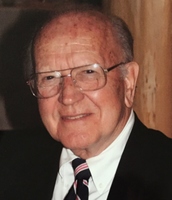