To share your memory on the wall of Gladys Bruner-Petrilla, sign in using one of the following options:

Provide comfort for the family of Gladys Bruner-Petrilla with a meaningful gesture of sympathy.

We learned deep lessons of social justice from her. Mom worked for the local Juvenile Justice Committee to develop alternatives to prison sentencing. In her private practice she would assist women who were being emotionally abused and helped them have the courage to obtain a just divorce. She resided at Rossmoor Senior Living Community for 22 years where she held many volunteer positions including president of the Synagogue Sisterhood as well as president of the congregation. She was also a member of the Interfaith Council and shared great friendships with many of the members and clergy. Mom was loyal to her friends and kept lasting friendships her whole life.

Mom loved to travel to Europe, visiting her nanny's family in Bavaria and her Irish Aunt in London. In her retirement years she visited Tunisia, Turkey, Spain, Jordan, Egypt, Israel and went on an Alaskan Cruise. Mom loved modern art and was not afraid of color. She encouraged her children in music and art and was a patron of the arts herself attending classical music concerts for decades at Mccarter Theater in Princeton as well as Opera in NYC. She loved to discuss current events and supported liberal causes and read the NY Times daily and watched public television, following congressional politics throughout her eighties.

Though we have been blessed to have her with us into her 90s, this week we lost a wonderful, loving mother and a grandmother who doted on her grandchildren. Gladys Bruner Petrilla leaves behind her children: Jacob Bruner, Martin Bruner and Carol Swinchoski, as well as her stepchildren Catherine Steo, Mary Petrilla, and Lauren Thornton, as well as her grandchildren: David Bruner, Cristina Steo, Anya Swinchoski and Benjamin Swinchoski. As is said in the Jewish tradition, when a soul passes from this world, all their accumulated good deeds shine forth as a light in the world. Although we feel that awesome and awful sense of finality, we are left with peacefulness, love, and gratitude for sharing her loving presence.

Arrangements are under the care of Orender Family Home for Funerals, Manasquan, NJ. In lieu of flowers please consider a donation to the New Jersey Youth Symphony in our mother’s honor at https://app.etapestry.com/onlineforms/WhartonMusicCenterNewJerseyYo/donatenow-petrilla.html. Mom enjoyed watching and listening to Anya and Benjamin play many beautiful concerts with this organization over the past eight years. To send condolences to the family please visit www.orenderfamilyhome.net.
Read Less

There are no events scheduled. You can still show your support by sending flowers directly to the family, or planting a memorial tree in memory of Gladys Bruner-Petrilla (Schoenhaut).
Plant a Tree

Donations are being accepted for: NJ Youth Symphony Honor of Gladys Bruner-Petrilla.

We encourage you to share your most beloved memories of Gladys here, so that the family and other loved ones can always see it. You can upload cherished photographs, or share your favorite stories, and can even comment on those shared by others.

Posted May 19, 2020 at 01:53pm
I was sorry to hear about Gladys' passing and remember her fondly. She inspired me to study Psychology in College and continue my career as a Psychologist (although not in clinical). I had the pleasure of learning from her as I watched Jacob, Marty and Carol when they were young and I was made to feel a part of the family. I know she has left a lasting impression on all of those she came in contact with and particularly those she helped whether through therapy or just being a friend.
Donna Blumenthal Chlopak
Comment Share
Share via:
K 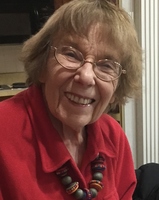