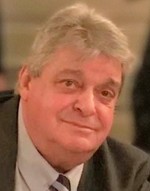 Robert W. Szeigis, 73 of Wall passed away peacefully at Jersey Shore University Medical Center, Neptune. Robert was born and raised in Jersey City, NJ and was a graduate of Snyder HS. After high school Robert entered the US Army and served during the Vietnam War. After his military service Robert worked for Colgate-Palmolive before he began his 25 year career with Port Authority of New York and New Jersey as a car inspector for the PATH system. Robert retired in 2012 and enjoyed his daily routine of going to the Atlantic Club. He was proud of his Jersey City roots, passionate about sports, and enjoyed his time at the beach. He loved spending time with his family, especially hanging by the pool in the summertime.

Robert was predeceased by his parents William Gargiulo and Mary Cochrane. He is survived by his beloved wife of 43 years Susan (nee Hanlon) Szeigis of Wall; his three loving daughters Suzanne Vetrano and her husband Nicholas, Stephanie Prol and her husband Timothy, and Sharon Szeigis all of Wall. Robert was the cherished grandfather of Nicholas Robert and Michael Nunzio Vetrano and Ella Prol.

Arrangements are under the care of Orender Family Home for Funerals, Manasquan. Cremation will be private and there will be a memorial Mass of Christian Burial at a later date. To send condolences to the family please visit www.orenderfamilyhome.com.