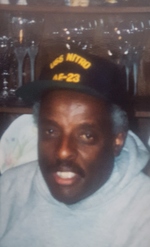 Leon “Harper” Galloway, of Brielle, New Jersey, a loved and treasured husband, father, grandfather, uncle and brother, passed away in his sleep at his home May 13, 2020. He courageously fought many illnesses associated with a head trauma accident from 1992. Harper was born October 18, 1938 in Charleston, South Carolina. He graduated from Immaculate Conception High School in 1958, and soon after, left his beloved city in the early 1960’s to pursue work in the service industry at the Jersey Shore. After many years working as a waiter, he accepted a position at Earle Naval Weapons Station, where he worked for over 20 years until his accident. Until his death, he remained a member of The Church in Brielle, where he was an avid member of the CIB Men’s Club and sang in the choir.

It was at the Jersey Shore where he met his much-loved wife of 55 years, the former Maude Alston. For 55 years they shared many of the things this life offers, including the joys and pains. Together, they overcame all of it. Harper was a devoted father who dedicated his life to his three children, Zora Harper (deceased); Leona (Floyd) Hazzard; and Leon Galloway, Jr. He loved, cherished and held close every moment with his four grandchildren, Leon, III; Jesse; Nina; and Cameron. He was lovingly called “Uncle Hop” by each of his many nieces and nephews, whom he adored and relished being a part of their lives.

Until his accident limited his mobility, Harper was a great cook and could not wait for the next party. He was a fan of fashion and the first one on the dance floor. He was an ace at the poker table and liked to share a drink. He had a very magnetic personality and made friends everywhere he went. He was known as “Sidewalk” because no matter what town or state he was in, someone always called his name. He would happily reply with a “Shaking-in-the-Breeze” greeting. He was always there to help in any way needed. Harper was not one to sugar coat the truth, and told it using his “extensive” vocabulary. After his accident, he settled into enjoying family gatherings. He kept a tight grip on the television remote control to watch old westerns and sports. The highlight of his days included receiving visits from family and friends and making daily phone calls, which would last for hours. Harper was a rare combination of hardness and tenderness. Until they see him again, he will always be missed and loved by his wife, his children, his grandchildren, his nieces and nephews, and his in-laws.

Arrangements are under the care of Orender Family Home for Funerals, Manasquan, NJ. A Celebration of Life Memorial will be held at a future date. In lieu of flowers, please donate a food item to your local food bank. To send condolences to the family please visit www.orenderfamilyhome.net.