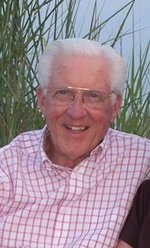 Charles A. Rein, of Wall, New Jersey, passed away peacefully in his home with his “bride” close by on Saturday, December 19, 2020 at the age of 95.

Charlie is survived by his loving and devoted wife of 71 years, Lois (nee Schoenknecht) Rein and their three daughters - Donna Rein of Wall; Beverly Howey and her husband Thomas of Wall; and Karen Duncan-Sherman and her husband Robert Sherman of Manasquan. Charlie’s life will be honored and treasured forever in the lives of his three loving grandchildren, Kyle Howey, Cheyne Duncan, and Danielle Howey.

Charlie is predeceased in death by his parents, Charles and Carrie (nee Patterson) Rein; and sister Lois (nee Rein) Gerard; as well as many dear close friends he considered family.

Charlie was born on October 9, 1925 at his home in Newark, NJ. After graduating from Newark’s West Side High School in 1943, his first job was with Schnefel Brothers on 17th Street in Newark. They were known to produce a wide range of items including scissors, tweezers, and straight razors under the trademark LaCross. During WWII, production of their products was suspended so the factory could produce knives, forks, and spoons for the troops’ mess kits. From LaCross he enlisted in the Army and fought with the 65th Infantry Division in General George Patton’s Third Army, through France, Germany, and Austria. Charles received the Combat Infantry Badge and Bronze Star Medal for his service in the Infantry. After the conclusion of hostilities in May 1945, he was transferred to the 9th Infantry Division of the Army of Occupation for one year. While there, he was assigned to the Dachau Concentration Camp to process and discharge German Prisoners of War. After discharge from the US Army, he enlisted in the Reserves with the 50th Armored for 9 years. He is a lifetime member of the VFW and the 65th Infantry Division Association.

Charlie met his childhood sweetheart, Lois in the early ‘40s while he was in high school and she in grade school (he was her brother, Jack’s best friend). Charlie attended Lois’s grade school (8th grade) graduation but then left Lois to go to war, leading Patton’s Army across Europe. He returned in time to see her graduate from high school. Shortly thereafter, they became engaged and were married in 1949. During this time and after his Army discharge in 1946, he worked for the Fidelity Union Trust Company in Newark for six years. In 1953, Charlie and Lois moved to Wall Township where they lived and raised their three girls in the home both he, his father, and Lois’s father built together. He worked for Jersey Central Power & Light Company as a Municipal Representative and retired from there in 1986 after 35 years. Charlie and Lois had been fully enjoying their retirement years together ever since in their home while enjoying family, and taking many incredible trips to places including Panama, Alaska, Bermuda, Europe, Hawaii, and spending a month in Australia with friends celebrating their 50th Wedding Anniversary(s).
He was a faithful parishioner and choir member of the First Presbyterian Church Belmar for 65 years. He served as a church Deacon for several years and held the position of Financial Secretary for the church for 25 years. He was a member of Ocean Lodge No. 89 Grand Lodge of Free & Accepted Masons for 64 years. He was an avid member of the Red Bank Area Chapter of the Barbershop Harmony Society (SPEBSQSA) for 60 years. He sang tenor with the Asbury Park Chorus of the Atlantic, which later became the Red Bank Area Chapter, and was active in five different registered quartets. Charlie performed in several productions of The Music Man which he often said was the highlight of his barbershop vocation.

“…and if someday we ever meet again
I will smile and stand in line,
just to sing one song, just one more time,
with that old quartet of mine.”

Burial services will be held with family in private, with a Celebration of Life planned for the spring or summer of 2021. In lieu of flowers, donations may be made in memory of Charles to Fulfill at 3300 Route 66, Neptune, NJ 07753, or https://fulfillnj.org/donate/ . Arrangements are under the care of Orender Family Home for Funerals, Manasquan. To send condolences to the family please visit www.orenderfamilyhome.com