To share your memory on the wall of William Walsh, sign in using one of the following options:

It is with deep sorrow that the family announces that Bill passed away peacefully on the evening of February 25, 2021.

Bill was born in Elizabeth, New Jersey on June 10, 1927 to William R. Walsh Sr. and Mildred Precheur Walsh. He grew up in Union, New Jersey and graduated from St. Benedict’s Preparatory School in Newark, New Jersey. Immediately following graduation from St. Benedict’s he enlisted in the Army Air Force and served during World War II as a weather technician in Okinawa. He and his wife Helen Torsiello Walsh were married in August, 1950 and moved to Piscataway, New Jersey where they raised their family. After their children were grown they moved to the Jersey shore area and lived for many years in Brielle, New Jersey until they moved to Sunnyside Manor in Wall Township, New Jersey.

Bill was a loving, caring husband, father, grandfather and great grandfather. His greatest joys were found in holiday and special occasion celebrations with his family, and he wrote eloquent letters of thanks and made special phone calls to his children and grandchildren after special family celebrations that they hosted and/or attended. He and his wife Helen organized memorable family events, including a celebration of their 50th wedding anniversary in Bermuda with their three children and their spouses and five grandchildren. Bill was always willing to provide a guiding hand to his children and grandchildren, using his famous “yellow pad” to sit down and map out the pros and cons of solutions to problems.

Bill obtained both undergraduate and Master’s degrees at Rutgers University, doing so while working full time. He began his career as a journalist with Spayth Weekly newspapers in Dunellen, New Jersey. Following that he served as School Business Administrator for the Piscataway Township Schools; and also taught Finance classes at University College, the evening division of Rutgers University. He was recruited to assist in the development of Middlesex County College where he utilized his financial expertise to secure the success of the new County college as the first Dean of Administration. Following that he was recruited in 1973 to serve as the first Treasurer and Chief Financial Officer of the Robert Wood Johnson Foundation in Princeton, New Jersey. He subsequently was named Vice President for Finance, and in May, 1986 was elected as the first and only staff member to be elected to the Board. He retired from the Foundation in 1990 and was elected Trustee emeritus in 1991.

Bill also served on several Boards, including serving as Chairman of the Board of Middlesex General Hospital (now part of the RWJ/Barnabas Health system) . He also served on the Board of the Red Cross and the Multiple Sclerosis Society as well as several other Boards of Trustees. He was one of the founders of the Cancer Institute of New Jersey (now Rutgers Cancer Institute of New Jersey) . He received numerous awards and accolades for his service and contributions in both the education and health care fields.
Following his retirement Bill and his wife Helen spent winters in Florida at the home they owned in Parkland, Florida for many years; and Bill pursued his passion for golf there. He was a member at Spring Lake Golf Club in Spring Lake, New Jersey for many years. Throughout his life he played at golf courses throughout the country, and he participated in numerous golf outings and tournaments. He proudly wore his green jacket and loved to wear it to dinner at Sunnyside Manor.

There are no events scheduled. You can still show your support by sending flowers directly to the family, or planting a memorial tree in memory of William R. Walsh Jr..
Plant a Tree

Posted Mar 22, 2021 at 01:32pm
Helen, Barbara and I were so sorry to hear of Bill's passing. He was such a great influence to all the people with who he came in contact. Please extend our condolences to the rest of the family. While he will be missed, knowing the Walsh family, we know you will lean on the love you have for each other.
Comment Share
Share via:
PD

Posted Mar 16, 2021 at 06:54pm
Dear Helen and family, our thoughts and prayers are with you. May your pain subside and your spirits lifted by the legacy of his life and love. 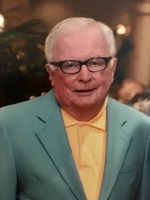